From project-imas wiki
Jump to navigation Jump to search

Chihyaa (Japanese: ちひゃー, Chihyaa) is a Puchidol in the Puchimasu! series and is based on 765 Production idol Chihaya Kisaragi. She is voiced by Asami Imai.

A Puchidol who enjoys skinship with flat-chested girls but is violent towards larger chested girls, the exception being Ritsuko. In the winter, her hair grows to great lengths, and she also grows cat-like ears.

Chihyaa was brought home by Miki during her vacation. (Season 1, Episode 07) 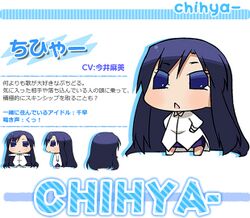 Miki discovered Chihyaa on a park bench while on vacation, and, due to her cup size preferences, was hostile to Miki, latching onto her arm. The locals found Chihyaa to be a nuissance, and bribed Miki with onigiri to keep her. Chihyaa was the first Puchidol Chihaya tried to name Gonzalez, the second being Makochi.

Chihyaa's favorite foods are bread and milk (especially milk, to the point of directing Miurasan to teleport her, Yayo, and Takanya to a cow in 1x63.) While still sounding like a puchidol, she can be understood over the phone (1x61, 2x57). Chihyaa lives with Chihaya Kisaragi; the arrangement caused some problems during their first winter together because, from the standard puchidol show of affection, Chihyaa likes to sleep on her face, and this caused her to choke on Chihyaa's hair, which grows rapidly after being cut to maintain its length (1x20). Chihaya soon got used to this (2x36).

Chihyaa appears as an accessory in this game. She is available by buying the entirety of Catalog 02 DLC. She raises the Vocal stat and can be worn on the Head.